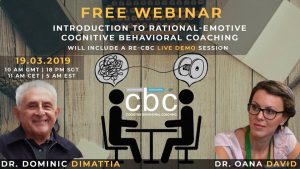 Cognitive-behavioral coaching is currently the most evidence-based approach to coaching, in the same way that CBT is the golden standard approach in psychotherapy. But what are its main theoretical assumptions? How are the two different? How can cognitive-behavioral theory be used in coaching? Is it effective? Is it easy to implement? Is it suitable for you?

Our webinar offered answers with founding experts of the field, Dr. Dominic DiMattia and Dr. Oana David, to these and many and other related questions. This webinar was designed to introduce you to the basics of CBC. The first part was consist of a discussion between the two experts on the roots of RE-CBC, its main theory and applications. The second part offered you a Live RE-CBC demo session on how it can work.

Dr. DiMattia is currently Professor Emeritus of Counseling and Human Resources at the University of Bridgeport and a Human Relations Consultant. He was previously Executive Director and Senior Staff Supervisor at the Albert Ellis Institute, vice-president of Human Resources for the Fireman Group in New York. Dr. DiMattia has authored first books on RE-CBC, written numerous journal articles, and conducted many workshops and seminars in life coaching and corporate coaching, based on the cognitive-behavior theory.

Dr. Oana DAVID is founding President of the International Association of Cognitive-Behavioral Coaching, Director of the International Coaching Institute, Babes-Bolyai University and Associate Professor in the Department of Clinical Psychology and Psychotherapy, Faculty of Psychology and Educational Sciences. Oana David is the author of recently released book Coaching for Rational Living published at Springer. She worked previously both as an internal Human Resources Consultant and has coordinated various performance management, organizational development, and coaching projects.

Theme by Anders Noren — Up ↑